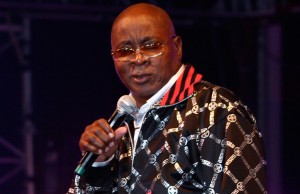 Slinger Francisco ORTT CMT (born July 9, 1935), better known as Mighty Sparrow, is a calypso singer, songwriter, and guitarist of Trinidadian citizenship. Known as the “Calypso King of the World”, he is one of the best-known and most successful calypsonians. He has won Trinidad’s Carnival Road March competition eight times, Calypso King/Monarch eight times, and has twice won the Calypso King of Kings title.

Slinger Francisco was born in the fishing village of Grand Roy, Grenada, West Indies on July 9, 1935. He moved to Trinidad with his mother, his father having relocated there in 1937. He grew up in Port of Spain. He began singing as a small child, but his love of calypso was discouraged while at Newtown Boys Catholic School, where he sang in the choir. At the age of 14 he joined a steel band comprising neighbourhood boys, and performed with the band at Carnival.

He received his performing name “Little Sparrow” during his early career, as a result of his energetic stage performances:
Your calypso name is given to you by your peers, based on your style. In the old days they tried to emulate British royalty. There was Lord Kitchener, Lord Nelson, Duke. When I started singing, the bands were still using acoustic instruments and the singers would stand flat footed, making a point or accusing someone in the crowd with the pointing of a finger, but mostly they stood motionless. When I sing, I get excited and move around, much like James Brown, and this was new to them. The older singers said “Why don’t you just sing instead of moving around like a little Sparrow.” It was said as a joke, but the name stuck.

After a couple of years he changed his stage name to “Mighty Sparrow”. On leaving school he began working for the government Control Board, but continued to perform calypso, which became the better paid of the two, and his residency at the Lotus Club made him a star locally.